Based on acts of violence and terror across our nation and world, we are often in need of support systems to engage in difficult dialogues with family, friends, colleagues, and most importantly, students. This site will go through multiple iterations and changes, but it is designed to provide resources to assist educators, students, and families with difficult conversations, processing, and modalities for healing.

"Action without reflection is meaningless activity. Reflection without action is mere academia"  (Peter Reason, 1988). Palou Freire once said "It is not enough for people to come together in dialogue in order to gain knowledge of their social reality. They must act together upon their environment in order to critically reflect upon their reality and so transform it through further action and critical reflection.” Dr. Freire also said, "If the structure does not permit dialogue, the structure must be changed."

SLZUSD Anti-Bias Framework: We, the educators of the San Lorenzo Unified School District, are committed to working daily to interrupt, disrupt, and dismantle systems that act to replicate historical inequalities and commit to examining systemic, institutional, and individual biases that make us complicit in that replication. As a result, students will become creative, collaborative, compassionate, resilient, well-informed and socially responsible advocates for equity and social justice as a result of their education, experience, and support from educators, families and the community.

SLZUSD Equity Mission Statement: Equity in the San Lorenzo Unified School district is acknowledging historical biases and changing the way they are addressed in terms of closing achievement and opportunity gaps. We define our approach to the work of equity as providing for each student the academic, emotional and social supports needed to increase the achievement of underserved subgroups at an accelerated rate while additionally increasing overall student performance. 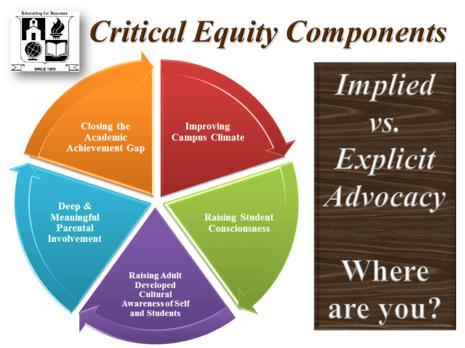