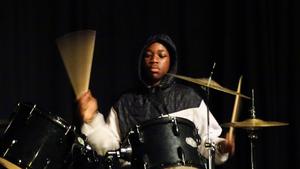 The show’s 27 singers, dancers, musicians and crew were ecstatic when they gathered on stage after 70 non-stop minutes, and so was the crowd cheering them on.

“Our East Bay Arts and San Lorenzo High School students were fan-freakin’-tastic tonight at Showcase!” wrote EBA Principal Alex Harp in a thank you email after the show. “The theater was filled with joy, electricity and love, thanks to the phenomenal talent on stage, in the booth, and working crew – all of whom were supported by an audience that was relentless in its outpouring of support.”

Showcase is a nearly decade-old tradition at East Bay Arts, which currently shares a campus with San Lorenzo High. This year’s production, with 16 total performances, did not disappoint.

Notwithstanding the students’ obvious talents, the show is grounded in appreciation and acceptance rather than a focus on polish, said music teacher Gretchen Baglyos.

“That’s inspiring, to know ‘I can put myself out there, and it’s not only OK, but I’m going to be honored for taking that risk,'” she said, adding that the students thrive in an atmosphere of “maximum love.”

EBA junior Alex Taylor, who danced to “Mascara” by XG, said she has gotten more and more serious about her dancing over the past couple of years. “I learned a lot of dances in my free time, so I wanted to show everyone what I’m capable of in dance.”

Another participant, junior Angelica Alconcel has recently begun learning guitar by watching YouTube videos. Despite being new to the instrument, she joined in a performance of “Sweater Weather” by The Neighborhood, along with singer Kiara Marshall and Antoine Wiley on drums.

Alconcel said classmates encouraged her to play, even though she didn’t feel quite ready to sing on stage.

Senior Christian Barrios, who performed in his third Showcase, said singing is a passion he acquired from family and through church. He performed “Promised Land” by TobyMac, accompanied by Praise Ahans (pictured) on drums and both Baglyos and student Alonzo Preciado on guitar.

In addition to wanting to set a positive example for incoming freshmen, Barrios said his motivation to perform was very simple: “It’s just being able to express myself and be in a group with people who are playing instruments and we can collaborate together.”