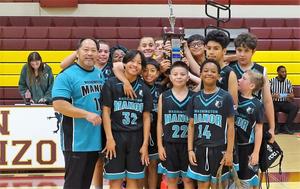 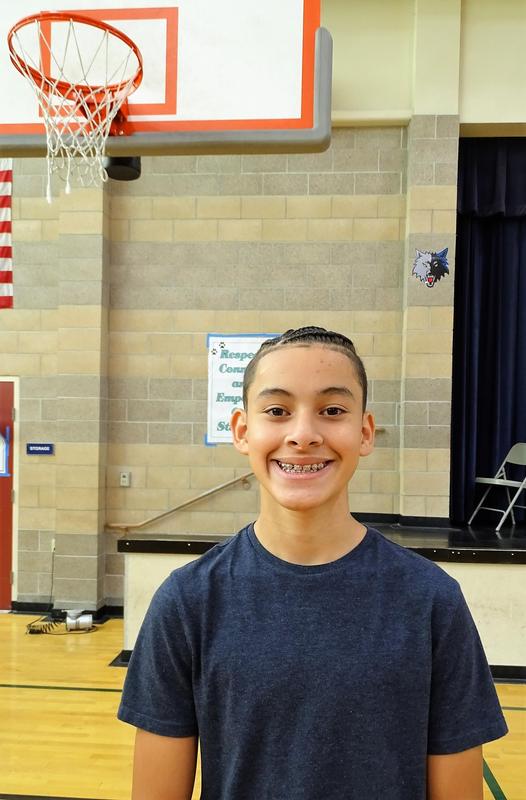 A league trophy for junior varsity boys basketball is on proud display in the office of Washington Manor Middle School, marking an end to the Wolves’ nine-year championship drought.

The trophy recognizes a group effort, but one player in particular, seventh-grader center Rogelio Ibarra, has earned special credit as the heart of the team on and off the court.

Ibarra nearly quit this fall when he wasn’t chosen for the school’s varsity team, which is made up almost entirely of eighth-graders. Instead, he listened to his father and his coach, who encouraged him to stick with JV as a way to gain lots of playing time – and a chance to lead.

Ibarra is reserved about his success, but he topped the team’s stats, averaging 11.5 points per game and 10 rebounds. The Wolves won the Southern Alameda County Middle Athletic League (SACMAL) championship by beating Canyon Middle School from Castro Valley, 42-31, on Oct. 13 in the San Lorenzo High School gym.

Washington Manor beat Itliong-Vera Cruz Middle School from Union City by one point in the semi-final, a game that almost got away after Ibarra fouled out with four minutes left. “Had he been in the game, it wouldn’t have even been a game,” Delos Reyes said, “but the kids pulled that one out.”

The school’s athletic director, physical education teacher Kathy Quintana, said Ibarra helped the Wolves overcome the disadvantage of facing larger schools like Canyon, some with more than twice as many students to draw on.

“Up against a school with a ton more kids than us and a lot more athletes, for us to win a championship was amazing,” Quintana said. Washington Manor’s last league title came in 2012, in boys varsity basketball.

The sixth- and seventh-grade squad will be recognized Oct. 26 at a school-wide assembly as their new SACMAL banner is unveiled on the wall of the gym.

None of the players, Ibarra included, had been on a basketball team before, Delos Reyes said.

“This is their first exposure to organized basketball,” he said. “We’re trying to get them to understand how to play as a team. For some of them it comes naturally, and others really had to work hard to get here.

“They took a lot of pride being at Washington Manor and representing the entire district.”

Still just 5 feet 8 inches tall, with room to grow, Ibarra said he looks forward to playing varsity basketball for Washington Manor next year and continuing with the sport in high school.