Dr. Camp Links CSUEB Award to His Legacy of Service to Students 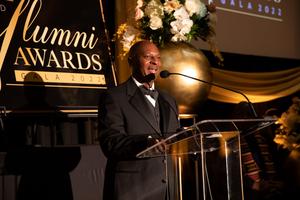 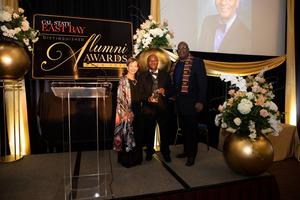 Honored Among University's Distinguished Alumni for 2022

As he accepted a 2022 Distinguished Alumni Award from California State University, East Bay, Dr. Daryl Camp connected his CSUEB experience to his ongoing work in behalf of students as superintendent of the San Lorenzo Unified School District.

He completed a doctorate in educational leadership at CSUEB in 2011.

Dr. Camp was one of four award recipients honored at an Oct. 21 awards gala dinner on the campus in Hayward. Starting in 1985, only 73 of CSUEB’s 160,000 graduates have been selected for the prestigious honor. The other three 2022 honorees are ceramic artist John Toki, digital TV industry professional Anupama Anantharaman and investment real estate executive Marvin Remmich, all of whom also live and work in the Greater Bay Area.

Dr. Camp’s remarks to an audience of about 250 in the Pioneer Ballroom echoed a point he also stressed in a brief video interview shown moments before – that throughout his 30-year career in education, he has worked to foster lifelong learning and opportunity for all students.

“Whether I was a teacher, or a principal, assistant superintendent and now superintendent, I always ask, ‘What’s going to be my legacy?’” he said. “The reality is that my legacy will be held through students – and some of those students I may not have known face to face – but my job as a superintendent is to set the conditions for students to excel and achieve. Ultimately, I take pride whenever students accomplish something right here locally, statewide and nationally. I take pride in their achievement because I know I had something to do with that system.”

He described the value of being a “transformational leader” as a “clear message” he received during his years in CSUEB’s educational leadership program, from which he received a master’s degree in 2001.

“I’ve always had that desire to serve and to say that, as a result of my being, students will be better off,” Dr. Camp told the audience. “That’s what drives me.”

Likewise, in both his acceptance speech and in the video, Dr. Camp spoke of the importance of helping students understand the role and impact of race as they navigate their lives.

“This is my fourth year serving the community in San Lorenzo, and I get excited every day I come to work,” he said in the video. “And why I get excited: We are unapologetic here about talking about the impact of race and how that should influence everything we do as educational leaders.

“At San Lorenzo, we expect all of our educators to bring race to the table and unapologetically normalize the discussion about race. That’s what we need to do so students are in a better position to influence their communities.”

During his speech, Dr. Camp thanked the university for recognizing him, describing it as one of the most meaningful moments in his life so far. He also thanked his late parents, his wife, Janee Cornelison Camp, and his two grown sons, Myles and Kendall.

“I thank my parents for having me grow up in an environment where I could kind of see some of the challenges that are in existence in urban communities and particularly in the public school system,” Dr. Camp said.

He cited the expectation for excellence he appreciated as an undergraduate at Morehouse College in Atlanta, where the Rev. Martin Luther King Jr. also graduated.

Dr. Camp joined San Lorenzo USD in 2019 after serving as superintendent of the Riverbank Unified School District in Stanislaus County for seven years.

Dr. Camp’s professional leadership includes service as Region VII president of the Association of California School Administrators (ACSA) for 2015-16 and as a member of the ACSA Board of Directors for three years.

He is a Masters in Governance faculty member and governance consultant for the California School Boards Association (CSBA), and he recently completed a two-year term as president of the California Association of African American Superintendents and Administrators (CAAASA).