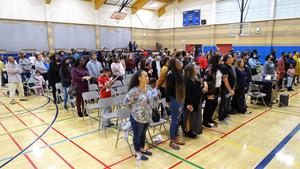 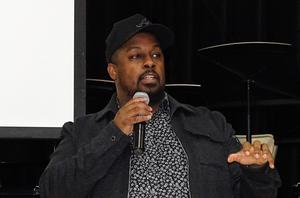 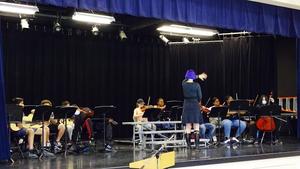 District partners such as the African American Regional Educational Alliances (AAREA) set up tables to share information, including college-going opportunities.

“This is to let families know that there are residents in the community that honor their children – that recognize their brilliance,” said Dr. Robyn Fisher, co-founder and director of AAREA, “and so that they know there’s someone in the community that’s looking out for them.”

After enjoying a free meal that included fried chicken, beans and rice, macaroni and cheese, the crowd of about 250 students and family members began the program by singing “Lift Every Voice and Sing,” the Black National Anthem.

Next came music and drama performances by Edendale students and a step dance presentation by members of the Black Student Union at Bohannon Middle School that included dramatic readings from Black poets.

Thompson, an Oakland native who covers Bay Area teams for The Athletic website, delivered a message of community support and fulfillment of self-potential.

He encouraged students in the audience to recognize and cultivate a circle of support and accountability beyond their immediate family. He described how he was guided to attend college and pursue his goals as a journalist by “aunties and uncles and people who act like aunties and uncles – and neighbors and teachers.”

“I didn’t understand that until I got older,” Thompson said.

Dr. Ammar Saheli, director of student support services, reinforced that point in his remarks, highlighting the collective responsibility of "the village" in helping all students succeed.

Speaking in terms of Black families in particular, Dr. Saheli said, “If your children are doing well, that’s great, but if there are some others that aren’t doing well, or as well, that means the village still has more work to do.”

A San Lorenzo district parent and longtime participant in AAFAC, Gary Blodger, said Black Family Night was right in line with the council’s goals of engaging Black students and parents.

“This is how we bring awareness of the activities and programs we offer,” said Blodget, who has a daughter at Arroyo High School and a son at Bohannon. “We try to bring our student body in and give them representation and leadership skills and contribute to their growth and development.”